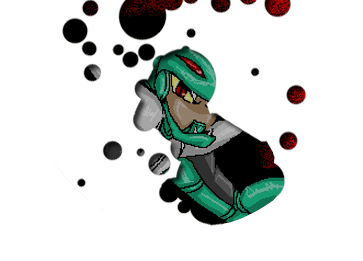 Unicron is a big player in the Transformer universe. He's the uber-evil, the big bad. And he's also responsible for the Mechanical Maniacs getting their Transmetal Armor!

Unicron has two origins. In one he's created by the insane Primacron as a means to destroy the universe. This is seen in the cartoon and it's very blah. Very ordinary.

The second is seen in all the Transformer comics. In it Unicron and Primus were ancient brother gods who were always fighting. Primus for good, Unicron for evil. In one fight Primus drove Unicron into a planetoid. Primus himself went into another.

Primus fashioned himself into Cybertron and created the Transformers and the Matrix as a means to fight Unicron in the future. Unicron made himself linto a "giant monstor planet".

Unicron also had several prototypes made of his monstrousness. The early ones didn't see a release because kids didn't find play value in a giant ball (probably didn't see the movie though). Neo Unicron was "too expencive" for the time. He was finally seen in Armada though.

But enough about that. Everybody knows that! Now we go into .... ten things you probably didn't know about Unicron! 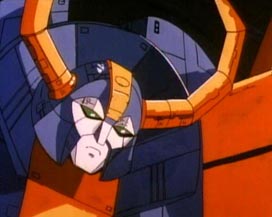 1) Clean Shaven Unicron - An animation mistake during his transformation/ "I'm off to destroy Cybertron" scene shown Unicron without a beard. It's leftover from the time when Ultra Magnus had his Diaclone colors, the Matrix was a purple orb, and where there was a totally different design used for Kup. 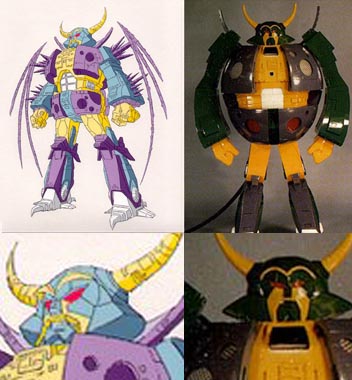 2) Unicron was first known as "The Entity." Okay, so anyone reading the TF Wiki could know THAT much. Who cares, right? Well, one Unicron Prototype made by Takara seems to sport "The Entity's" color scheme!Look at the face marking, the white chest and legs. While the purple has been turned to grey and th blue to some wierd green, that might be bad photo work. Or those colors may have been altered. All the colors match up to "The Entity's" color markings though. 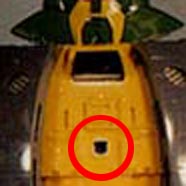 3) Unicron is a Decepticon! Yes, that's right. Not only does he create Galvatron, Scourge, and Cyclonus with Decepticon markings, but look here! What is this little thing on Unicron's chest? It appears to me that Unicron, like all good little G1 Transformers, was given a rubsign! Now, there's only two versions of rubsigns he could have been given. And Unicron does not look like an Autobot to me.

Okay, so Unicron isn't really a Decepticon now. But, if this toy was produced he may very well have been. And - Hey! Wasn't he given a Decepticon Cyber Key in the recent toy release? 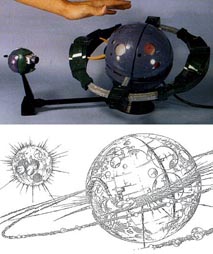 4) Mystery of the planet - solved! This is the only shot of "The Entity's" planet mode and - behold! - a smaller planet.

I've read alot of different explanations for it. One is that it's Lithone or some other planet for Unicron to eat. But why would it have a big gun if that were so? Other say it's some sort of projector. Well, this is the real deal.

Below the toy is a concept sketch for Unicron taken from Floro Dery, the artist responsible for designing new Transformers characters, who says that this concept of Unicron fatured a moon that was like a "mini Unicron". Also note the pocsition of Unicron's rings (nice looking but impractical for planet eating). Now look back at the toy! The rings are in the same position. The toy also has a small "planet". It MUST be the unused moon of Unicron! 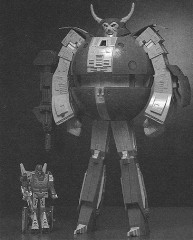 5) One Unicron prototype toy had a giant gun! And a small sheild which probably covered up the big yellow square on his chest in planet mode (you can tell it's the right sixe and that it's folded so it probably arcs down). Of course the real question is .... who does Unicron think he needs to shoot? He's the size of a PLANET for God's sake!

Needless to say, other than this one picture I have never seen either the gun nor the shield in a photo. 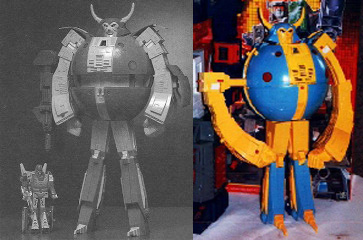 6) No one picture has this version of Unicron transformed correctly! The one on the left has giant half-circles for feet! What's up with that? As the picture on the right shows, unicron needs his ankles pulled down. However, the one on the right shouldn't feel so smug because he's not transformed correctly either! Unicron needs to pull his pants down a bit to show some skin like on the picture to the left. 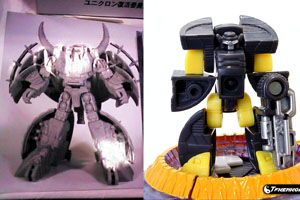 8) Dead End also bears a striking respemblace to the aformentioned Unicron's Moon from the early prototye of Unicron. Coincidence or homage? YOU decide! 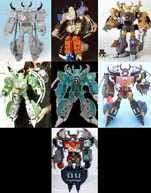 9) Mighty Morphing Unicron Rangers! After they finally made a Unicron toy the powers-that-be kinda got a little nuts with the idea. The public has seen ALOT of color variations on this one mold! First we saw the normal grey and black prototype, reminicent of Beast Wars Neo's prototype. Next the much-touted blue and orange prototype. Finally, the relese! It sports the classic Unicron color scheme. Next we have a lime green Unicron from Lucky Draw based on the scenes where the Minicons make a "Uni-clone" to fight hands-on with Unicron at the end of Armada. Following that is the *actual* Lucky Draw Unicron which is minty green. It also has green "planet-wings" whereas the proto has clear. Next comes the pink-chested prototype of Energon's Unicron (dodged a bullet there, folks!) Finally we have energon's black-lickorish Unicron sporting the best color sceme yet!

10) So all this Unicron discussion leads to the biggest question of all ..... which Unicron is biggest?? Now, these are arranged in reversed chronological order. MC Donald's Unicron (oh yes .... they made one!) is the first Unicron pictures on the left standing next to energon Unicron (which shares the mold with Armada's Unicron). Beside that is Beast Wars Neo's Unicron. Beside that is Hasbro's Unicron prototype. And beside that is the very first prototype made by takara.

A baffling mystery to be sure. However, I was undaunted. There's a picture of Unicron with G1 Hot Rod. A picture of Neo Unicron with Micromaster Hot Rod. And another G1 Unicron has a rubsign. I can work with these tools!

For starters I resized Hasbro's Unicron so that Hot rod Matched my picture. Then I did the same for Neo's. It was tricky, but I used the back of my hot rod to scale Hasbro's prototype down to match the others. I also used a picture of Hasbro's Unicron to TRY and complete Takara's Unicron's feet.

So, which is tallest? The answer is obvious! Hasbro's Beachball takes the cake! However: do note that both he and my reconstruction of Takara-cron have mistransformed feet. They SHOULD be slid down. I've made another size chart with both of them Photoshopped into correct transformations.

It's more signifigant in a large file. Still, Hasbro's Unicron prototype takes the win! Takara's prototype is shown to be a tad smaller than Energon unicron. And Neo Unicron is shown to be a pathetic little twerp compared to his brothers!

Not shown is Primus (who also transforms into a planet), and Cybertron Unicron, which transforms into a tank. Because this picture is kinda old and I didn't have either figures at the time. I still don't have cybertron unicron. But he ought to be about the same height as Hot Rod (probably a bit bigger tho) which makes his robot mode just a bit taller than Mc Unicron. Primus himself comes to about Unicron's chin, but he has guns that, when popped up, come to about the top of E-Unicron's head. Maybe when I get c-Unicron I'll update the picture.

So there it is: some facts about Unicron you probably didn't know about.

I am Gauntlet and this has been Gauntlet's guides.