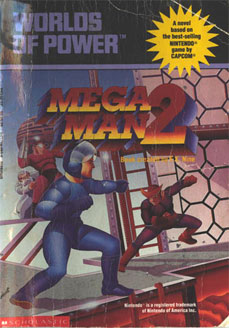 It's MEGA MAN to the rescue!

Only our robot super hero can save the universe from the evil Dr. Wily and his gang. They're the toughest, baddest robots ever made. Can MEGA MAN defeat FLASHMAN, CRASHMAN, BUBBLEMAN, and the rest? Will the universe be safe again for honest people ... and robots?

The complete story of the Nintendo® action-adventure game - with loads of game-solving hints throughout.

Thusly is described the thrilling tale of Mega Man 2 ont he back of the book. On the second page into the book is a line saying that the book is not "authorized, sponsored, or endorsed by Nintendo of American Inc" so this is probably one of the least official mega Man products out there. And yet, it exists!

Here's some (ludicrously detailed) points jotted down while reading the book.

FYI, the book's order is: Metal > Flash > Bubble > Air > Crash > Heat > Wood > Quick and the book recommends that order. It also makes a number of mistakes, however it's pretty clear that the author played through the game ... unlike some other licenced properties. The stages, for the most part, even line up with the actual levels (even if they leave things out). For about half the book the author just makes up names for the various enemies, but in the other half he follows the game's manual. It also seems like Megaman actually uses a gun, as in the game's box art (but unlike the book's cover art, where it's airbrushed out).

As a book it's very much for kids. Kids who've already played Megaman 2, because they'd actually be able to follow the story relatively easily. All in all it's a rather nice addition to Megaman obscurity.